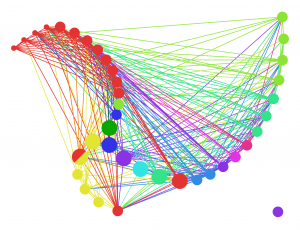 “PEERLANG: How Peer Interaction Mediates Second and Third Language Acquisition” is an interdisciplinary research project currently being carried out at the Institute of Applied Linguistics, University of Warsaw, financed by a SONATA-BIS grant № 2016/22/E/HS2/00034 from the National Science Centre of Poland.

A number of recent studies have shown that social contacts (friends, family, etc.) determine our behaviours more than previously realised. Research has revealed that the network of contacts has more impact on whether a person is going to smoke, be overweight, or get in conflict with the law than individual variables such as mother’s education. The role of social networks has also been proven in linguistics. William Labov showed that the language spoken by members of a Harlem street gang had more in common with the slang of a competing mob from another district, than with the language of neighbours from the same block. Labov ascribed this to shared systems of values and norms of behaviour between the two mobs.

However, until now there has been no research that would rigorously analyse students’ interactions among one another and with others, and the influence of this communication on progress in second/foreign language acquisition. This is the aim currently realised in the project. The analyses employ the innovative methodology of social network analysis, borrowed from the interdisciplinary battery of tools used in complexity science. This enables investigating the impact of peer interactions on language acquisition and academic success. The project will fill a key gap in second/foreign language acquisition research and lead to a better understanding of the mechanisms and role of social contacts in the learning process, particularly in the Study Abroad context.